Victoria Beckham, as a fashion designer, she gave up her once beloved high heels changed to comfy flats, Find out why?

One of most famous U.K. celebrities, Victoria Beckham As a world famours designer and wife of David Beckham, she has a gorgeous life and career.She’s been spotted wearing more practical shoes like sneakers and loafers.

Known for her signature sky-high stilettos, it seems that the designer will be hanging up her heels for good.

The designer has been quoted as saying: ‘I beyond hate ballerina flats. It wold be a big news if I wear flat shoes.’ Going for a party with husband David Beckham. Holding a big bag walking on the street with high heels. Foot itches just by looking at it. At the official opening, of course wearing her high heels.

As a symbol of Victoria, find out why she gave up her beloved high heels. A few years ago, the designer has been quoted as saying: ‘I beyond hate ballerina flats’.

Recently it shocked attendees at her eponymous label’s fall 2016 show in New York, when she took her final bow donning a pair of Adidas sneakers.

See the pictures below Once quoted saying, ‘I just can’t concentrate in flats’, Victoria Beckham, 41, with an effortless style.

she said ‘I just can’t do heels any more. At least not when I’m working’. Find out why.

Underwent for surgery with the bunion a few years ago. After years in skyscraper heels, Posh, 41, underwent for surgery with the bunion. After the surgery she still wears high heels.

The reason of giving up high heels She said: ‘I just can’t do heels any more. At least not when I’m working. I travel a lot. Clothes have to be simple and comfortable.’ The mother-of-four shocked show attendees when she emerged from backstage and onto the catwalk, after the final lap, dressed in tailored trousers and a roll-neck jumper which she teamed with a pair of box-fresh trainers.

Victoria, 42, during 9 years not only she gave birth 4 times, but as a designer she also created her own brand ‘Victoria Beckham’. Referring to the impeccably-designed line, she said: ‘She’s having fun, Victoria claimed it allowed show goers to see ‘the real me’.

However, Victoria has seemingly moved on from that significant style phase and her priority now lies with ‘making getting dressed easy’.

Although she gave up high heels… We look forward what she could bring for the fashion world for the next step. 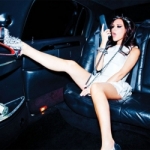